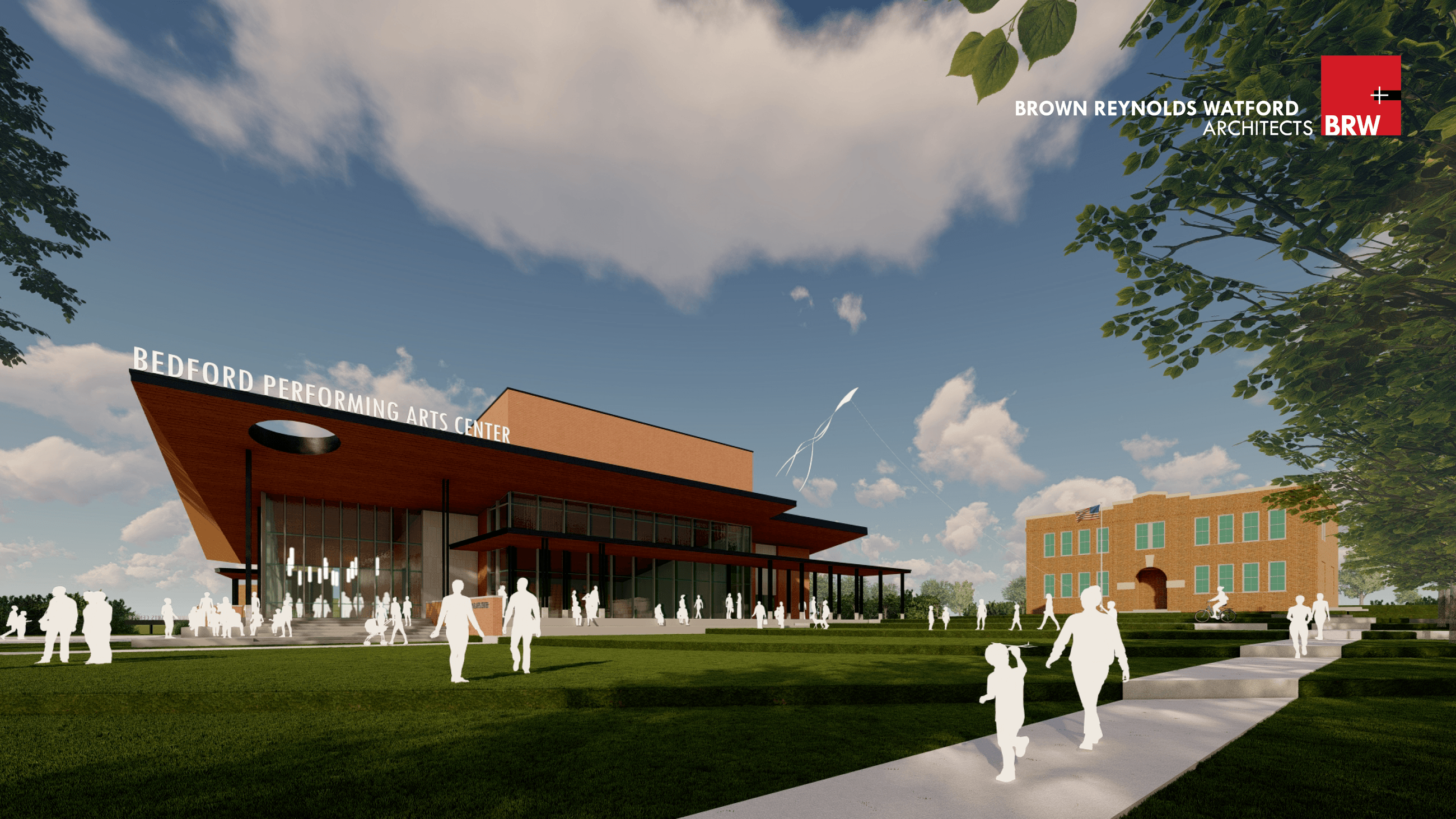 Brown Reynolds Watford, Architects Inc. (BRW) recently updated the City Council on the Performing Arts Center project. The exterior design and floor plan of the building are close to being finalized, after months of gathering feedback from residents, area arts groups, and monthly meetings with City officials. The facility will be built in the area between the Library and Old Bedford School and will face east.

In the current plans, the building is proposed to encompass approximately 14,500 square feet, 4,600 square feet of which will be devoted to performance space. The auditorium will provide seating for more than 200 people. With an emphasis on flexibility, the performance area seating will also be retractable for a banquet-type event for up to 264 people.

Based on research and discussions with area performing arts groups, the City anticipates the facility will be in demand for a variety of musical, theatrical, dance, and even spoken word (such as a lecture series) events. Its size, flexibility, and seating capacity are considered sustainable, in that it fills a need for performing arts venues of this size in the area.

To ensure the facility will be attractive to as many performers as possible, the Performing Arts Center will have automated acoustic settings for each type of performance, a retractable blackout curtain to cover the large windows, and flexible seating arrangements.

The Bedford Performing Arts Center will have several places to showcase visual artists’ work as well.

Once complete, the Performing Arts Center is intended to be a focal point for arts and culture in the community, with the surrounding property serving as a gathering place for residents and visitors. The facility will also serve as an economic boost to the area, including the future Bedford Commons development.

The exterior of the building will have a unique, modern look, that incorporates a large amount of glass to bring natural light into the facility. It will also include building materials and architectural elements from both the Library and Old Bedford School for consistency. With the help of a landscape architect, the green spaces around the Arts Center will allow for events that use both the inside and outside areas, as well as activities and art.

Parking will be expanded and will meet the City’s parking requirements. At this time, a final number of parking spaces has not been determined and will depend upon the finalized footprint of the building. The Library’s parking lot will also serve as overflow parking for the Arts Center. There will be an additional entrance to the building on the west side, facing the Library.

In 2017, Bedford residents voted to approve $70 million in bond funds for capital improvements and new facilities. Of that amount, $5.5 million was set aside and allocated for a Performing Arts Center at the Old Bedford School site. This decision was possible due to the ballot language for the bond package that referenced “multi-purpose event facilities.” The measure on the ballot stated, “The issuance of $70,000,000 general obligation bonds for park and recreation facilities improvements (including ball field, aquatic center, and multi-purpose event facilities improvements and other related improvements)."

In May, the Council approved an agreement with BRW to design and oversee construction of the Center, directing the firm not to exceed $10 million in construction costs.

In addition to bond project dollars, the City has several options to fund the remaining portion needed such as Generations Park at Boys Ranch savings, hotel/motel tax revenue, American Rescue Plan Act funds (federal dollars given to cities to use at their discretion), or general fund moneys. The property tax rate will not be affected to fund the remaining portion of the Performing Arts Center.

BRW representatives shared their next steps will be to complete the schematic design, finalize building materials and pricing to ensure it is within the budget Council provided. If the current facility design cannot be built within the pre-determined $10 million construction budget, the design will be modified. In January, BRW will start work on the official construction documents and the City anticipates breaking ground late spring or early summer. It is anticipated to be complete winter 2024.

Prior to BRW’s presentation to Council, the City held two informational meetings about the Performing Arts Center’s proposed site plan. The first was held in conjunction with the Library’s October 2021 Beer and Brats event where residents could view the proposed Performing Arts Center site plan, ask questions, and provide their feedback via survey. The second opportunity was a Town Hall meeting in February and comprised of a short presentation followed by a public comment portion. That feedback was provided to BRW Architects to help guide their design.

Prior to those meetings, the City hired Webb Management Services Inc. in 2019 to conduct a feasibility study which would provide an updated perspective on the demand for performing arts spaces in the area. During that study, Webb gathered information from various individuals and organizations, including local and regional arts and cultural groups.

BRW Architects has completed more than 400 community projects in approximately 250 Texas communities. Of those 400 buildings, 22 of them are performing arts projects such as concert halls, recital halls, music rehearsal spaces, multi-media theatres, recording studios, black box theatres, theatre arts rehearsal rooms, and special event spaces. Outside of municipal clients, BRW also works for clients such as the University of North Texas and Texas A&M University for their performing art space needs as well.

BRW is partnering with Schuler Shook Associates, one of the foremost theater consulting firms in the country, and Kirkegaard, a nationally recognized company specializing in architectural acoustics, to ensure the Bedford Performing Arts Center is ideal for all performers. 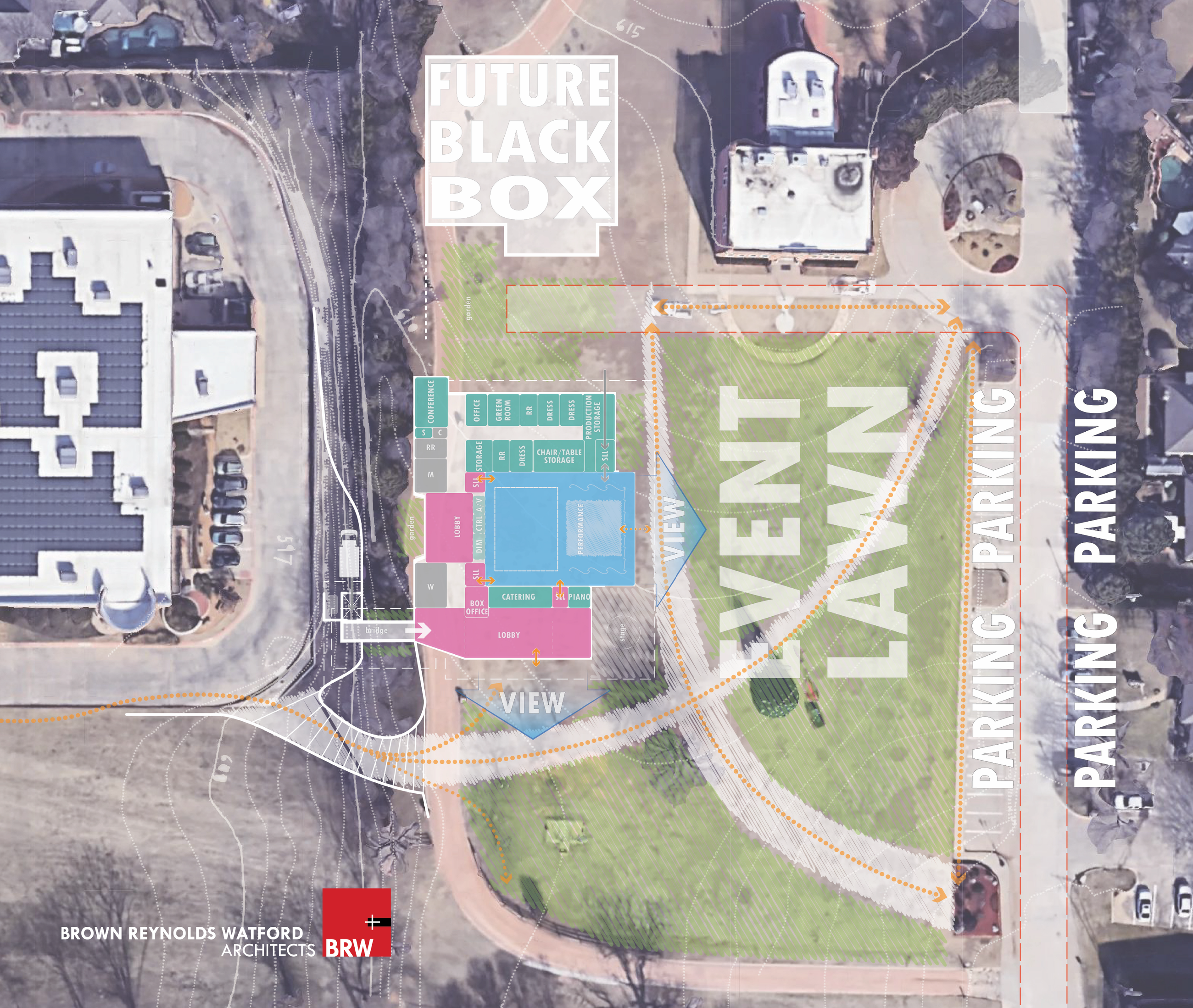 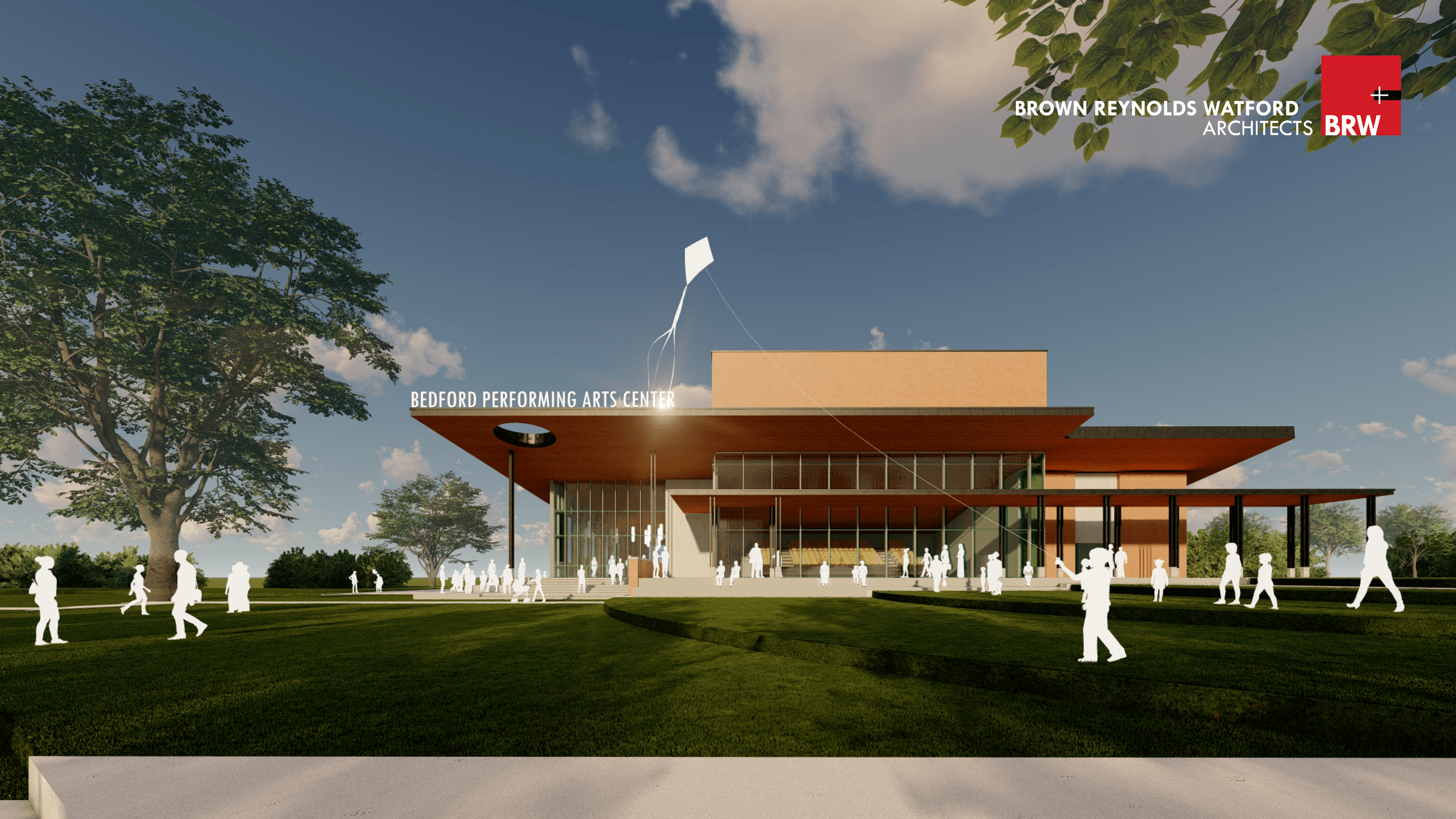 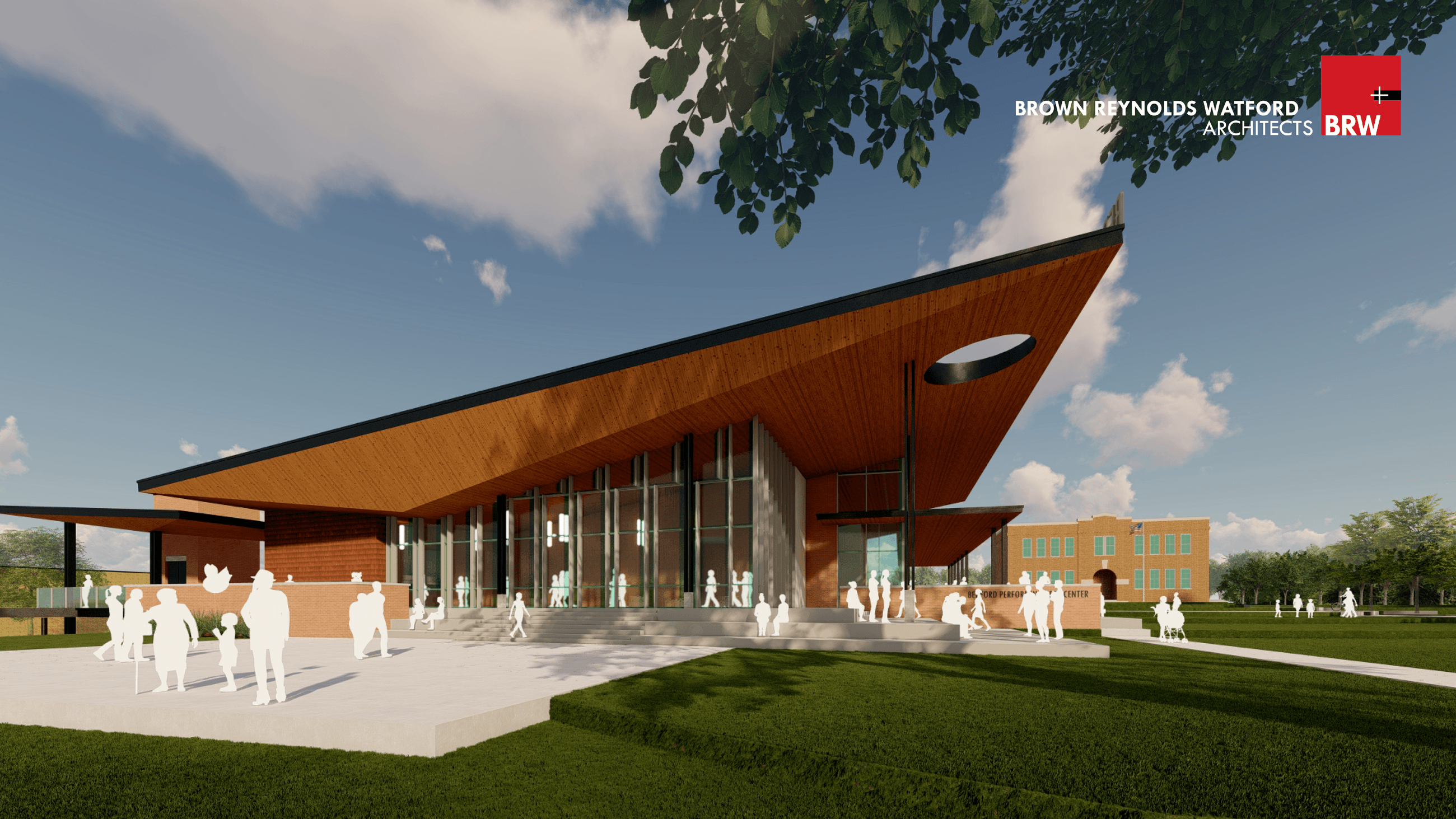 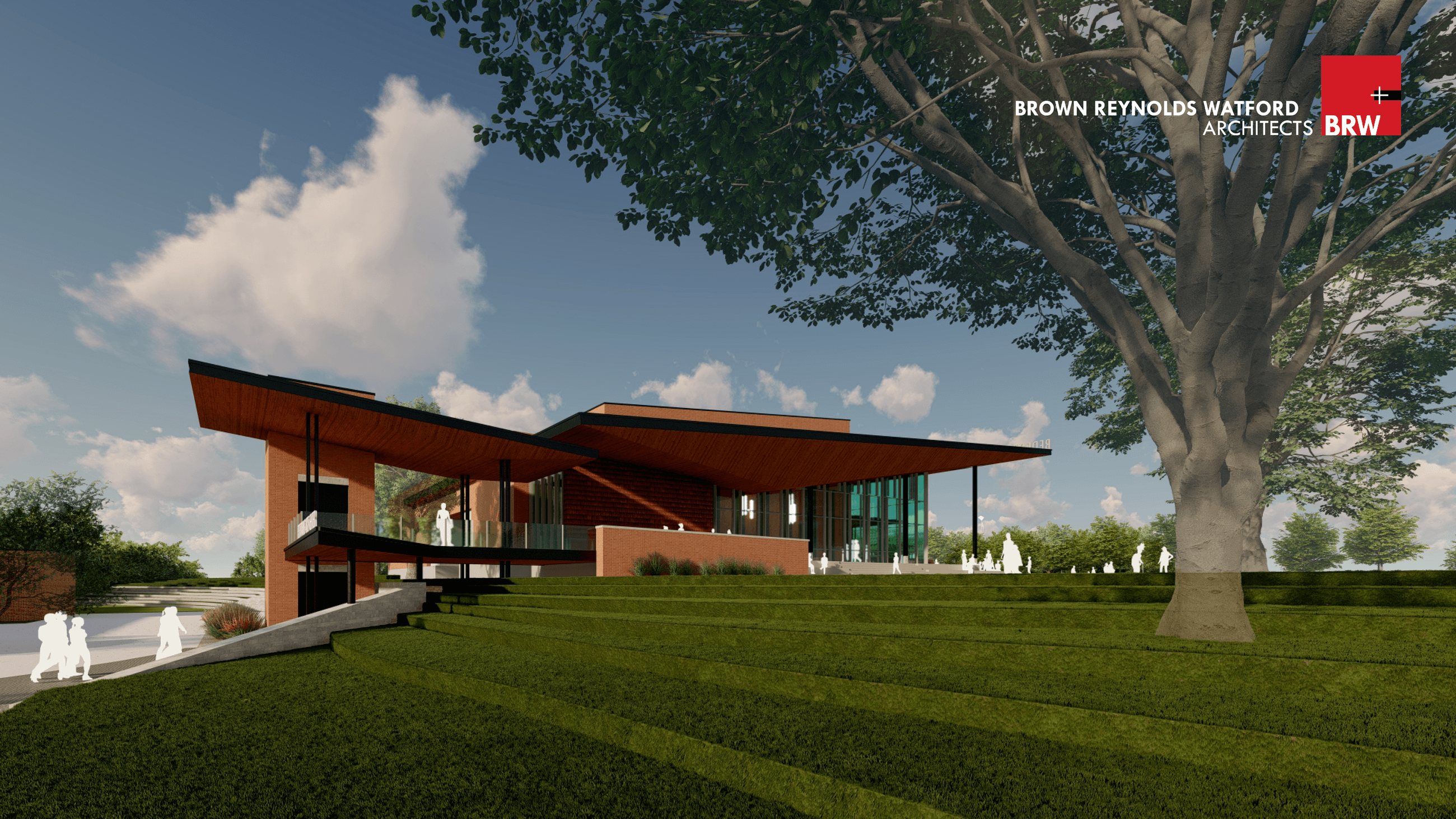